We love sharing stories like this. Meet Kaylie, a freshman at Pell City High School in Alabama. She was inspired by her little sister who suffers from Rett Syndrome for her science fair project titled: Which genetic mutation type causes the earliest age of onset of the ten most common symptoms of Rett Syndrome? 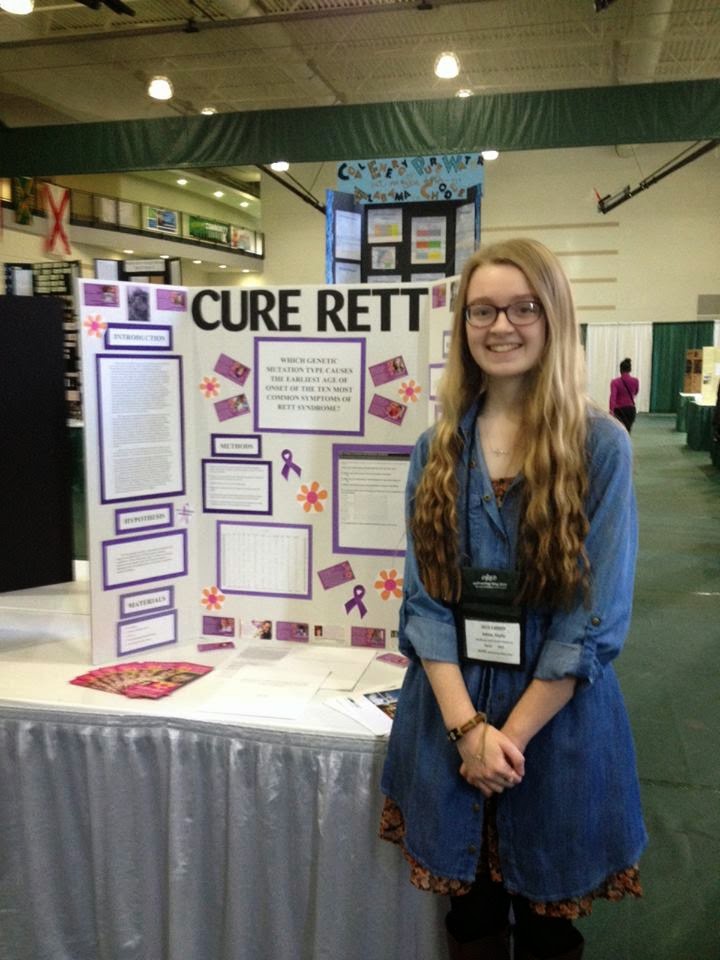 Kaylie, tell us more about your science fair project on Rett Syndrome. First, why did you choose this topic?
I chose to do this project on Rett Syndrome because of my sister Julie Grace. I did it all for her. After going to many therapies and doctors’ appointments with her, I have become very interested in not only Rett Syndrome, but also genetics. I hope to go to school to become a Physical and Occupational Therapist.

How did you decide on the specific project?
I originally just looked on the Science Buddies website for a project that had to do with genetics. I found one that talked about different mutations in Cystic Fibrosis. My mom showed me the InterRett Output Database. I saw that they had the average age of onset of epilepsy, so I combined that with the Science Buddies project and after a lot of thinking, I came up with my project. “Which genetic mutation type causes the earliest age of onset of the ten common symptoms of Rett Syndrome?”

What was your goal for this project?
My main goal of the project was awareness. I just wanted to put it out there because really only my close friends know about it. Plus it gave me an excuse to talk about it a lot!

What was the most difficult part for you?
I don’t think there was really a hard part of this project. I loved doing it and reading the little stories people would add in about their girl walking or talking! I just found the whole thing very interesting.

What did you learn from the process?
I guess if I had to go back and change anything I would ask for the ages in months because converting each one into months individually wasn’t my favorite thing. I learned so much from this project! I read so many different versions of explanations of Rett Syndrome. I learned so much about it and the mutations.

What are some things you want people to know?
I want people to learn that Rett Syndrome affects 1 in every 10,000 girls and it could affect anyone! I want people to know that the girls are in there and they know EVERYTHING we say or do around them! And I want people to know that early diagnosis is the key because therapies can start sooner and that a cure is coming! I think some good advice is if you want to then go for it! Tell everyone you can and talk their ears off about it if they will let you! And don’t be afraid to ask for help or an explanation because some of the scientific stuff can get pretty confusing!

Kaylie's mother, Melanie, shares "There are times I let myself think back to the days before Julie Grace’s diagnosis and it seems like a different lifetime. But in the year and a half since Rett Syndrome entered our lives, our girls’ love for their sister has shown through in everything they do. I’m very proud of all four girls: Julie Grace for her strength and perseverance, her older sisters’, Kaylie and Emily’s,  love for her and their constant fight to make sure that everyone knows about Rett Syndrome and her twin sister, Jerri, for keeping us all a little more “real.”

Kaylie's project won locally and went on to the regional competition at UAB in Birmingham, AL where she was awarded First Honorable Mention in her class. She received the Surgeon General's Award of Excellence for her presentation. Congratulations Kaylie! Thank you for educating others about Rett Syndrome.
Posted by Girl Power 2 Cure at 10:24 PM No comments: 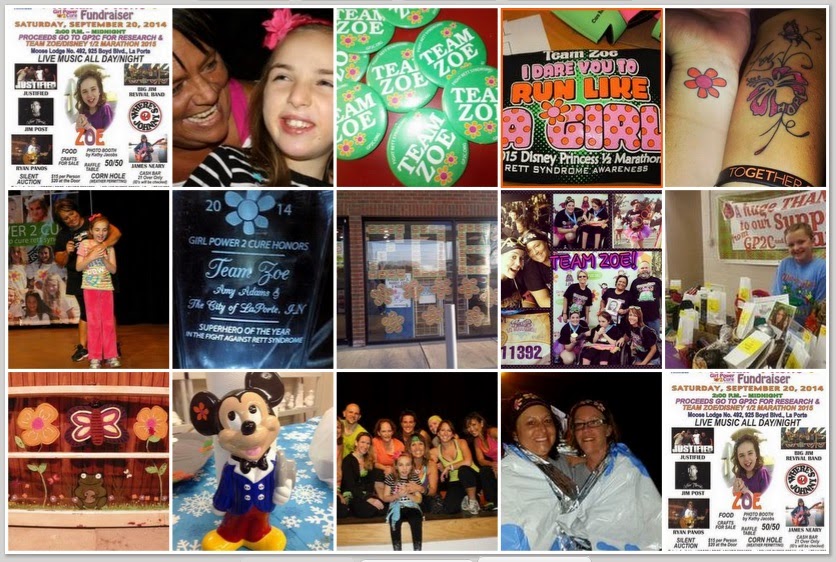 There's something special that happens when Team Zoe steps out to raise awareness and funds for Rett Syndrome.  As you can see from the photos above, this group (led by Zoe's mom Amy) moves mountains for this special little girl and her fight against a syndrome that has stolen her voice and use of her hands as well as her ability to do so many things a little girl should be able to do: dance, run, skip and play.

Girl Power 2 Cure recently awarded our first annual "Superhero of the Year Award" to this great team and their city, La Porte, IN.

Here is a photo of Zoe and members of the team with Mayor Milo. The La Porte community has played a vital role in Team Zoe's successful fundraising. They have helped raise over $40,000 and rank as the number one city for our Facebook fans and website visitors.

We can't thank Team Zoe enough for their commitment, passion, creativity and positive impact on the Rett Syndrome community and our organization.
Posted by Girl Power 2 Cure at 9:24 AM No comments: